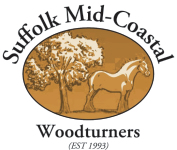 Delivery options may be available.

Aerial view of the Orwell bridge

Andrew Smith and Albert Lain had been members of the North Suffolk Woodturners Club, affiliated to the AWGB, for a few years, during which it’s membership grew to a massive 12 in number. At an AGM meeting in 1992 the chairman expressed the wish of the club to keep the membership numbers to a size that would fit in a normal garden shed workshop. As Andrew and Albert were the most distanced members it was suggested that they set up their own branch, hence the birth of Suffolk Mid-Coastal Woodturners.

An inaugural meeting was convened on Thursday January 7th 1993.(notice that the first Thursday of the month is still our choice of meeting day) . Arthur Baker was the secretary and Herbert Price the treasurer, with Albert as chairman.

They held monthly meetings at Marlesford Village Hall, started the system of invited turners to demonstrate and used a mirror of Stainless Steel above the demonstrator to improve viewing. They had to move Albert’s very heavy bench mounted Poolewood 28\40 into the hall for demonstration days and there was doubt if the worm eaten wooden floor would bear the weight. While they were based at Marlesford, Peter Taylor became a member along with many others bringing our membership above 60, which was our stated maximum. To avoid declining membership to any enquirers, Peter Taylor recommended moving to Dallinghoo Village Hall, which we did in 1998. Membership continued to grow to such an extent that there was a danger of Dallinghoo becoming too small. Again, rather than disappoint would be applicants the committee encouraged the establishment of a West Suffolk branch headed by Bill Care at Stonham Village Hall. That branch continues to flourish with some members belonging to both.

The overhead mirror got upgraded to very shiny plastic, but always proved very heavy to install, so it was a welcome improvement when cameras were used to project images of the demonstration onto the wall, greatly magnified. Also the tiered seating  arrangemeent, lights and sound system was added.

Today we now have a membership of 70+ members. We still meet at Dallinghoo Jubilee Hall, Nr Wickham Mkt (  IP13 0JY )in the heart of Suffolk. Meetings are on the 1st Thursday of each month at 7.30pm for the times and dates please see our programme.﻿﻿